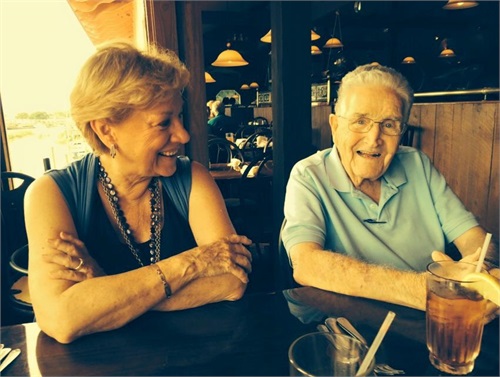 A Memorial And Lesson From My Late Grandfather Dick

Dick Rutherford was born on February 5th, 1925 and died peacefully while holding my grandmother’s hand in prayer on January 5, 2016.  A great man in more than a few facets of his life, Dick was my step grandfather.  I had the honor of giving away my grandmothers hand in marriage at her wedding to Dick.  As I write this the stock market has had the worst start to a year in its history, with the Dow dropping a record 6.2% in the first week of 2016.  During the three and a half hour long ride down back roads in North and South Carolina to his funeral in Myrtle Beach gave me time to reflect.  First, I reflected on my surroundings and the vast number of people who never have a care about the stock market.  Driving past broken down trailers and less than desirable homes, it made me think of how lucky we are.  Second, it made me think about Dick during his lifetime and the ups and downs he has survived. In full disclosure I did not work with Dick to manage his financial life.  He worked with a dear friend who he served with in the Korean war.  Now back to his life.  On the date of his birth, the Dow Jones closed at 121.48.  The day he died the Dow Jones closed at 17,156.28.  Dick was a very steady guy, never too high, never too low and had told me many times that he invested that way.  While never having a very high income, he lived a very comfortable retirement for many years and had done a fine job managing his finances.  He had weathered many storms.  He lived through the Great Depression, the Crash of 1929, the second World War, the Flash Crash of 1962, the Oil Crisis in the seventies, the booming 1980s, Black Monday in 1987, the Tech Bubble in 2001 and the mortgage crisis of 2008.  The reason for my rambling is as we look at the last week, it is normal to have a fear of the markets and think that things are going to go down.  In reality, we all could learn a little bit from Dick.  He stayed the course through ups and downs and history always rewarded him in the long run.