How Trump's tax plan may impact your returns

How Trump's tax plan may impact your returns

With campaign promises still reverberating about reversing policies and changes to tax laws, many are wondering how trump’s tax plan may impact their returns and overall financial future.  This presidential victory was so unexpected, even for Trump supporters, that it sent the stock market into a nose dive and the telephones of financial experts ringing incessantly.  Not surprisingly, since the election many Americans have been expressing deep concerns about the emerging financial environment.  Many are asking what a Trump administration will ultimately mean for investors, corporate organizations, small businesses and of course; whether Trump’s tax plan will impact their returns.

In a nutshell; Trump’s tax proposals simplify income-tax brackets, raise, reduce or eliminate exemptions, deductions or tax brackets. The overall analysis of his proposed tax plan is expected to reduce federal revenue by $191 billion over the first decade, increase wages by 7.7% which could also raise the GDP by 9.1%.

The following table is an approximation of today’s income tax brackets: 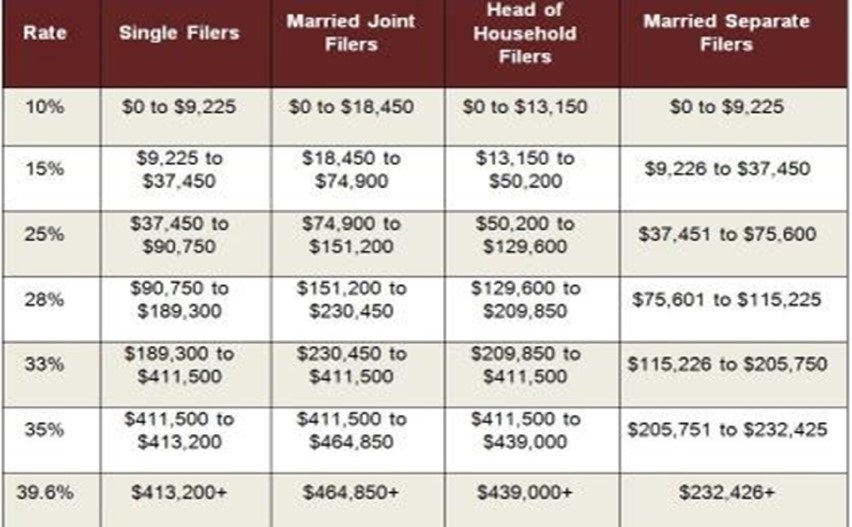 We agree with senior fellow at the Urban-Brookings Tax Policy Center, Howard Gleckman that if Trump achieved everything he promised on the campaign trail, it is fair to say that American’s can expect major tax changes in coming months under his administration.

Going forward; it may be helpful to outline and review some of the issues proposed by the president elect. For instance; Trump promise to the following amendments to the tax laws:

Based on the Trump Tax Foundation estimation, here's what they are expected to look like under the Trump Administration if his tax plan were approved in its entirety:

In a recent interview, Financial planner Matt Logan also caution investors to be careful about making emotionally charged financial decisions at this time. Logan, whose business credo is focused on building fundamentally strong relationships with his clients suggests that you share concerns with your financial expert and work together to make necessary changes based on solid information as the financial environment evolve and change. It is also helpful to keep in mind that, regardless of what was promised during a presidential campaign, the incoming president may not be at liberty to make unilateral changes to existing tax laws.

Matt Logan is a Representative with Matt Logan Inc., and Summit Brokerage and may be reached at www.mattloganinc.com, 336-540-9700 or [email protected]